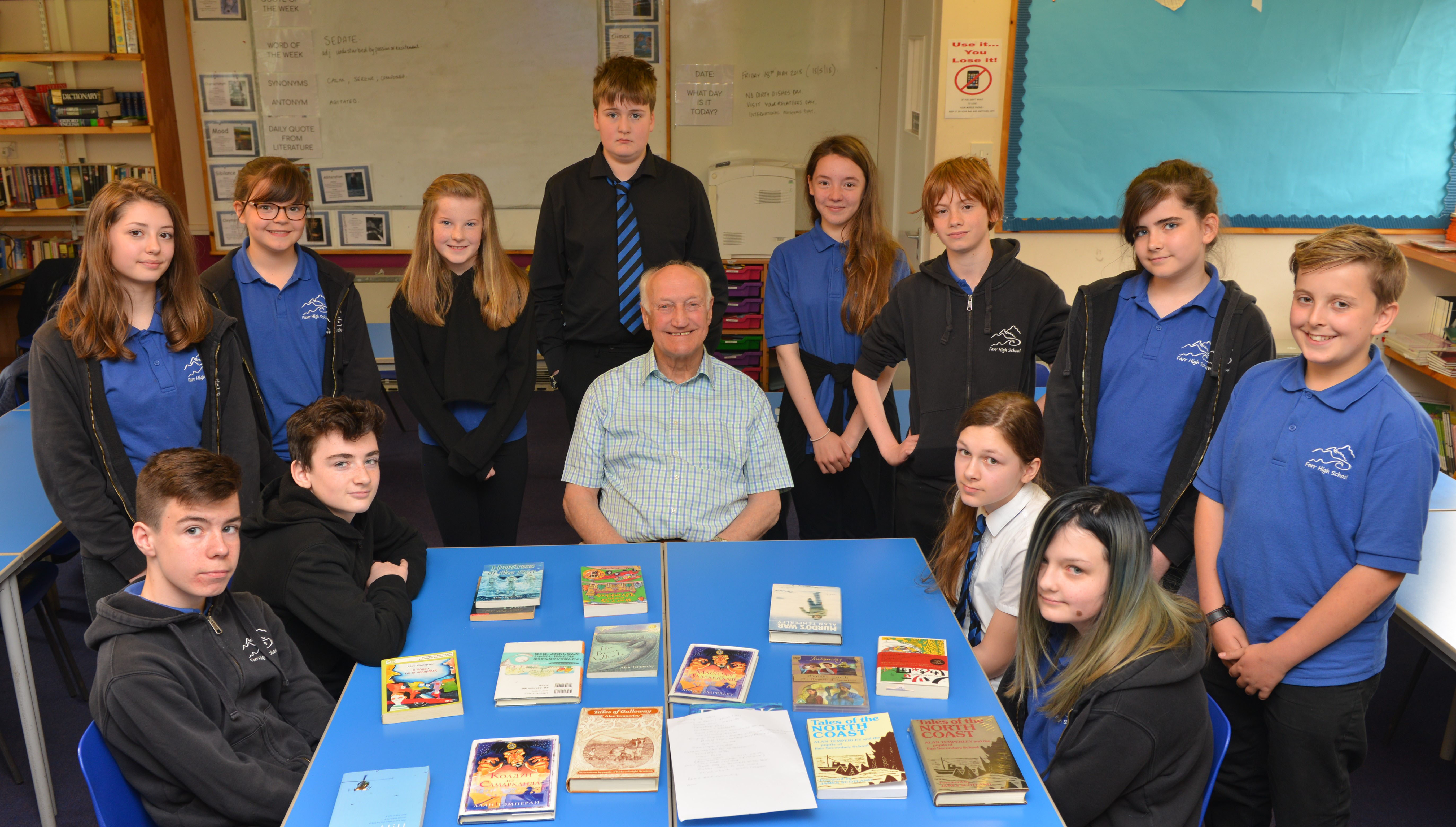 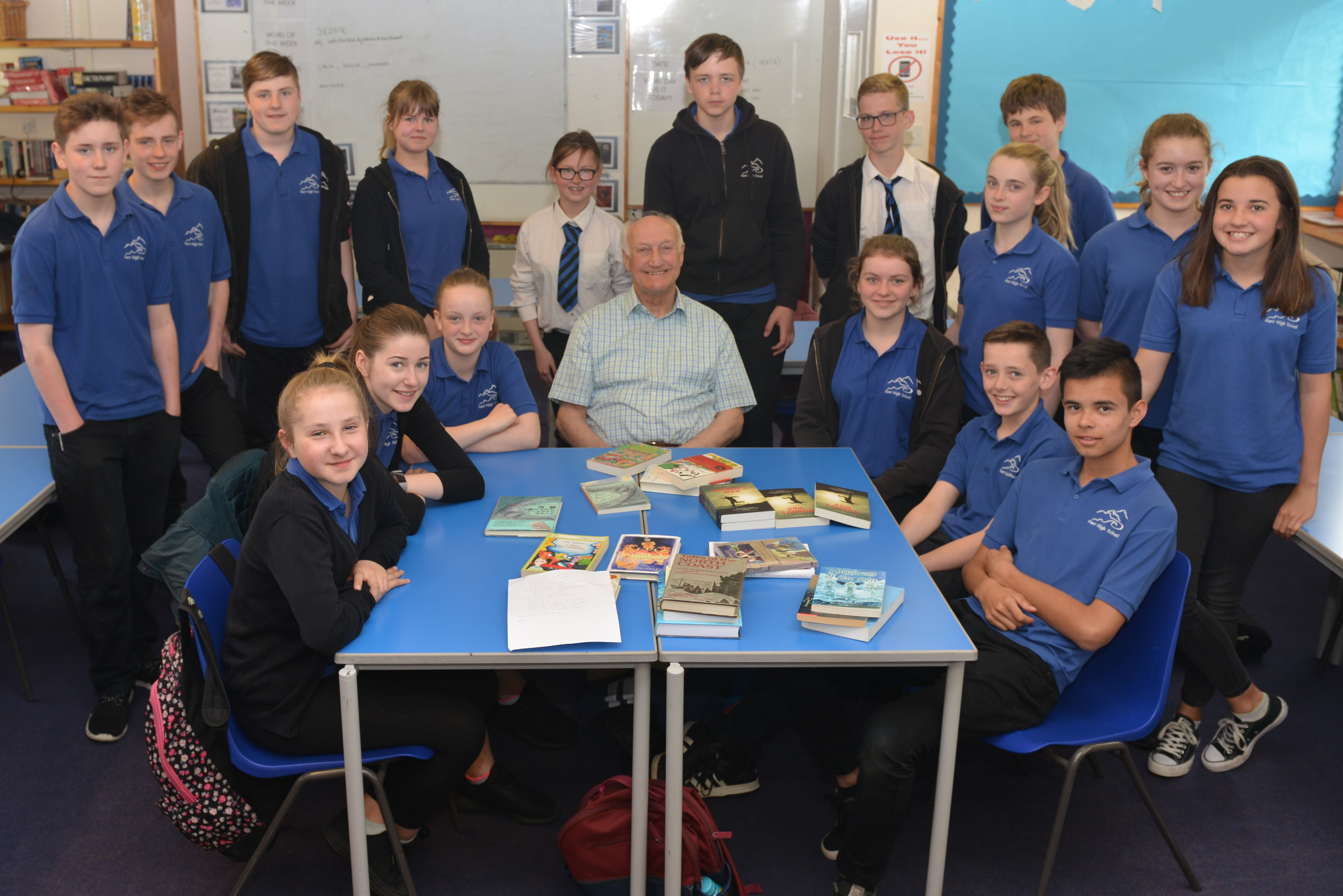 When Alan Temperley arrived in Bettyhill in 1965 to take up his first teaching post after an earlier career in the Merchant Navy he had just reached the tender age of 28.  Last week he was back in the English classroom in Farr High School with only a few weeks to go to his 82nd birthday – a neat reversal of numbers as he pointed out to his first and second year audiences.  In between, as well as teaching at various locations in southern Scotland, he had fitted in a few more years at sea, including a trip on an Icelandic trawler, but his main endeavor had been the creation of a dozen or more works of children’s fiction, some of which had been translated in to many languages with one, Harry and the Wrinklies, forming the basis for a television series.

However, the purpose of his visit was not to extol these achievements but to revisit the origins of his very first book, Tales of the North Coast, which he had researched with the assistance of his pupils in Farr between 1965 and 1973 and which, after many successful editions by the Research Publishing Company and the Luath Press, had just been reprinted by Strathnaver Museum in association with Bettyhill, Strathnaver and Altnaharra Community Council.

The celebration of this seminal work started with the present pupils of Farr on Friday morning and continued in the evening at Strathnaver Museum with a launch event including several of those former pupils who had assisted with the initial production almost fifty years before and with his erstwhile colleague, art teacher Elliot Rudie, whose students had provided the fifty eight illustrations which complemented the original stories.

A third element in the celebration was scheduled for Saturday afternoon where the intention was to explore another of Alan’s works, The Brave Whale, with the lower primary age children at whom it was directed.  Due to competition from two birthday parties and unusually fine weather, this attracted a very small though appreciative audience.

The reprinting project, which was funded in full by SSE’s Strathy North Joint Community Fund and the Bettyhill Renewables Community Fund, was conceived with a dual purpose.  The intention was to create a modest income stream for the Strathnaver Museum, part of which will be ring-fenced to finance future reprints of the Tales so that this unique volume may remain available to the current population of North Sutherland, which has changed greatly since Alan’s day, and to the constant flow of visitors engendered by the NC500 promotion.

Hopefully that will go well but, whatever the outcome, Alan was delighted with the return to his old stamping ground, ‘The pupils at Farr were very well behaved and attentive,’ he said, ‘just as they were all those years ago, and it was really great to see those with whom I had worked in the sixties, some of whom had travelled a great distance to take part.  The whole event was very well organised and I enjoyed myself immensely’.

Copies of Tales of the North Coast are available to purchase from Strathnaver Museum.

“Who could have guessed it all those years ago as the first tales came in on scraps of paper to be worked on in class, tales of my pupils’ heritage, tales from the days before radio and television when people sat with cups of tea, pancakes and maybe a whisky or two round a fragrant peat fire? So here they are afresh, a slice of history for the children and grandchildren of those original authors, for lovers of the north, for anyone who likes a good story. We hope you will enjoy them.”