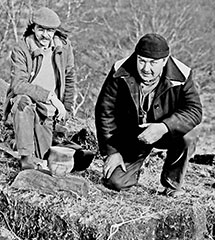 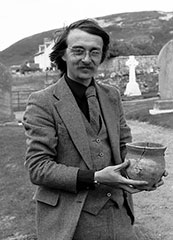 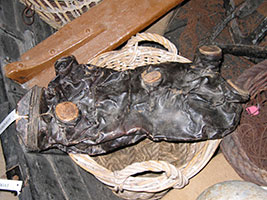 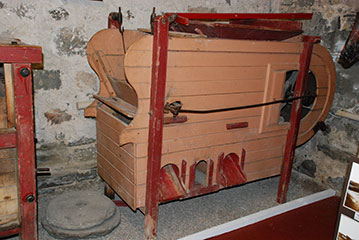 Objects that make up Strathnaver Museum’s Collection have grown over the years and has fascinating artefacts from various aspects of our history and culture. The social history intertwined with the fishing and agriculture has given the Museum a wealth of artefacts from those that were once in everyday use to the unusual, unique and rare.

Discoveries are so often made during the course of daily life. For instance – a Bronze Age burial cist containing a cremation beaker was unearthed by road workers at Chealamay, Strathnaver in 1981. The beaker is made of clay and would have held honey or mead. The ‘Chealamay’ beaker is on display within the museum and the burial cist has been reconstructed in the cemetery by the front door. The ‘Dogskin Buoy’ is probably our most intriguing artefact. Along with an old leather boot which is now known as ‘The Melness Shoe’, it was found in the wall of a house in Melness while it was being renovated. These finds probably date from the nineteenth century. The Dogskin Buoy and the ‘St Kilda Mail Boat’ were featured in the BBC Antiques Roadshow’s visit to the Castle of Mey.