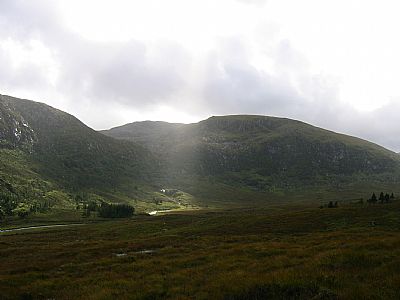 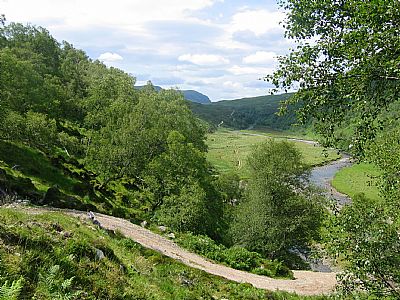 Although historically various peoples have helped shape the identity of the people of Dùthaich Mhic Aoidh (Mackay Country); with varying levels of settlement and assimilation of Norse-speaking Scandinavians, Lowlanders and Borderers bringing Broad Scots and the English of more recent incomers, there is no doubt that this area was, and to an extent remains, defined by the Gaelic of the people of Dùthaich Mhic Aoidh.

Gaels from other parts of the Scotland often initially struggle to understand speakers of Dùthaich Mhic Aoidh Gaelic; a dialect quite distinct and different to that spoken even by the nearby Gaels of Caithness, of East Sutherland (Cataibh) and the Gaels of Assynt. It is thought that the Caoidhich (Mackays) who settled in the North Highlands originally came from Moray and were driven out for a variety of reasons including their exploits in ‘togail nam bò’ (cattle raiding). Although they resettled in territory, they retained their familiar Gaelic, now Gàidhlig Dhùthaich ’ic Aoidh.

The Mackays are and were an important clan in the Highlands, with the Chief of Mackay securing the services of the pipers of the famous MacCrimmon clan of Skye, pìobaireachd bards such as Am Pìobaire Dall (Iain Mackay of Gairloch), and hosting uaislean (chieftans) from Ireland for great hunting expeditions and grand outdoor dining to eat their kill.  You can click here to hear William Matheson sing a few verses of the great pìobaireachd song Cumha Choire an Easa, a lament for the Chief of Mackay written as a dialogue between Coire an Easa (near Gleann Gallaidh, see below) and the Chief himself.

(Mackay to Coire an Easa)

(Coire an Easa to Mackay)

The Mackays have long dominated this part of the north Highlands, from Reay in the east across to Durness on the far north-west coast, and it is a Mackay – Rob Donn Mackay – who has became one of the most celebrated exponent of Gàidhlig Dhùthaich ’ic Aoidh and indeed one of the Scotland’s greatest bards.   Rob Donn composed from infancy until shortly before his death, with his need to compose coming second only to his desire to hunt deer, eventually getting him expelled from his native land to the coast but thankfully for us, leading him to compose one of the great songs of Dùthaich Mhic Aoidh, ‘Gleann Gallaidh’:

Rob Donn was a true Gael with not a word of English; travelling amongst communities where Gaelic was the language of the people, and leaving a massive impression on Sutherland and across the Highlands and even now older Gaels recite his bàrdachd from memory. Rob died late in the late 18th century, just before the beginning of a century which would have huge repercussions for the communities, the way of life and indeed the Gaelic language of the people of Dùthaich Mhic Aoidh.

Despite the unfortunate history of Sutherland over the last two hundred years and the attitudes of esteemed individuals such as James Loch, former factor to the Sutherland Estates who “would never be satisfied until the Gaelic language and the Gaelic people would be extirpated root and branch from the Sutherland estate; yes, from the Highlands of Scotland.” And the former Inspector of Schools for Ross, Caithness and Sutherland Mr. D. Sime who wrote officially: “I should regard the teaching of Gaelic in schools in any shape or form as a most serious misfortune”, Gaelic lives on in North-west Sutherland.  Okay, various elements have taken their toll on the Gaels and the learning of Gaelic, not least the attitudes of some senior education figures, but through Gaelic education, through local tuition and through the actions of local groups,  Gaelic and the culture of the Gael lives on in Dùthaich Mhic Aoidh.