The following list is the men who died during World War One and honoured on the Bettyhill War Memorial. If you have information or photographs of any of the men listed, or anyone from the area who took part in WWI, we’d love to hear from you! Please email Eileen Mackay at genealogy@strathnavermuseum.org.uk. 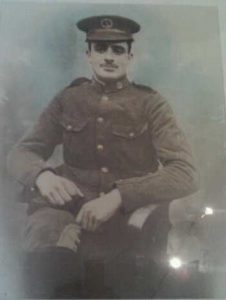 Robert was born on 13th December 1896 to William John Murray (born 1865) and Marion Morrison (born 1873) of Achneiskich. The Lovat Scouts were to be a territorial force but on the outbreak of war on 4th August 1914 many volunteered for Imperial Service. This 1st line force landed in Gallipoli in September 1915 and were evacuated to Egypt in December 1915. Robert died on the 5th November 1915 and is buried at the Pieta Military Cemetery in Malta.

Grateful thanks to Robert’s great niece Nanette for the information.