The Durness War Memorial lists the names of 31 men who lost their lives in the First World War. The following list is the men who died during World War One. If you have information or photographs of any of the men listed, or anyone from the area who took part in WWI, we’d love to hear from you! Please email Eileen Mackay at genealogy@strathnavermuseum.org.uk. 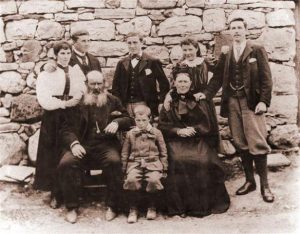 Donald Mackay was born in 1892 to Edward Mackay and Flora Macdonald of Lerin, Durness. Donald served on the Somme and died from his wounds on the 23rd July 1916 and is buried at Heilly Station Cemetery, Mericourt-L’abbe. Donald is shown as a young boy seated front centre in this image with his family.

Thanks to Colin Brown who forwarded this wonderful family portrait of Edward and Flora Mackay and their 6 children. Colin’s great grandmother Jane was Donald Mackay’s older sister.

William was born in Sangomore on the 2nd February 1987 to merchant John Mackay and his wife Annie Dunlop. In a letter home to his mother on 13th April 1917 William describes going ‘over the bags’ for the first time during the Battle of Arras 9th to 16th April. On the final day of the battle William was killed in fierce fighting around the Chemical Works in Roux.

Read more about William Mackay as part of the Pibrochs and Poppies project carried out in 2015 with Feis air an Oir.