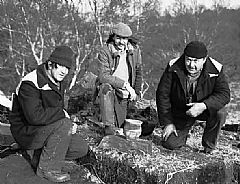 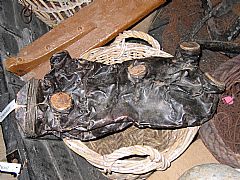 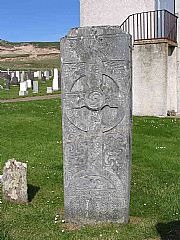 The Museum Collection and Displays have developed from a traditional collection of artefacts relating to the domestic and working lives of the people of Strathnaver Province, which covered a much larger area of the North West beyond the river strath of today. This collection continues to be enlarged through generous donations of items, Strathnaver Museum led research projects and discoveries of archaeological artefacts, adding to our understanding of the past.

The Croft House with the Box Bed is one of our visitors’ favourite items.  The ‘crux’ or roof truss was once the hull of “The Thorwaldsen”, shipwrecked in Strathy in 1858.  It had been recycled as a roof truss in a croft house in Strathy and was retrieved for the museum when the house was being renovated.  The figurehead of “The Thorwaldsen” can also be seen in the museum.

Discoveries are made during the course of daily life such as the Bronze Age burial cist with cremation beaker, which was unearthed by road workers at Chealamay, Strathnaver. The beaker is made of clay and would have held honey or mead (photographed at the site with Highland Council road workers and Highland Region Archaeologist Bob Gourlay). The ‘Chealamay’ beaker is on display within the museum and the burial cist has been reconstructed in the cemetery by the front door.

The “Dogskin Buoy” is probably our most intriguing artefact. Along with a boot (also in the museum) it was found in the wall of a house in Melness while it was being renovated. It probably dates from the 19th century. The Buoy, along with the “St Kilda Mail Boat” was featured in the BBC Antiques Roadshow visit to the Castle of Mey.

The Main Room is dominated by the massive pulpit erected in 1774, emblazoned with the initials of the Rev. George Munro. It was from this pulpit that David Mackenzie was obliged to read out the eviction notices in 1819 and more happily it was here that people from all over north Sutherland assembled in 1883 to testify before Lord Napier and his colleagues in a Parliamentary Commission. Their subsequent report was accepted by Parliament and led to substantial improvements in the conditions of crofters and other small tenants.

This room houses a selection of peat cutting tools, early laundry items and farm implements. Also in this room are a set of tombstones and on the floor among these are two small Early Christian monuments unearthed by Kevin O’Reilly at Grumbeg, Strathnaver. These stones are certainly older than the Farr Stone which can be found in the graveyard to the west of the Museum building. These Early Christian monuments probably date back to 750 AD or even earlier.

On the upper floor you will find The “Mackay Room” which tells the story of the Clan Mackay. Here you will find exhibitions, Mackay memorabilia and a wealth of Mackay family histories which have been kindly donated.

This year’s special community curated exhibition is ‘Rob Donn Mackay: a 300 year legacy‘ which tells the story of Gaelic bard Rob Donn. Rob Donn was an extremely important figure in Gaelic literature, a contemporary of Robert Burns Rob Donn provides an invaluable insight into the lives of the ordinary people of Mackay Country in the 1700s.

High on the wall in the Mackay Room you will see a large three-dimensional motto of the Mackay Clan. It was made for the museum by Colin Mackay of the Clan Mackay Society of Edinburgh in 2004 and it dominates the viewing area, acting as a proud reminder of the clan’s history.

Exhibits include the chanter and music of John Mackay, from Trantlebeg, Strath Halladale, a renowned local piper. During his lifetime he composed over 300 tunes. When he was working on the croft a tune would enter his head so he would abandon whatever he was doing and run home to commit the tune to paper. Johnny had ownership of a very old chanter, used by a Pipe Major in the 93rd Highlanders (the chanter displayed in the showcase).

The large oil painting displayed in the Mackay Room is of John Mackay “Hereford” who was born and spent his first school years at Rogart, Sutherland before moving to Hereford. He grew up to become an engineer of note who built railways in South America and became a millionaire. He returned to Scotland in the 1880’s and helped set up the Clan Mackay Society and the Crofter’s Commission.

The lectern especially made for the book “Clan Association of Canada” – relates to some famous and interesting Mackays in Canada”. It was presented to the museum in person by Moira Cairns, President of the Clan Mackay Society of Canada in 2004.

The museum building sits within the Graveyard at Clachan which is a working graveyard and contains many interesting monuments:

Outside, the Pictish Farr Stone, a prominent rectangular slab stands in a vertical position a few yards west of the church. The basic design is a ringed cross, but this has been elaborated with decorated panels, blended with great skill to produce a harmonious whole. It probably dates from between 800 and 850 AD. Despite local tradition there is no mystery about its origin. It probably marks the grave of some important local, religious or political personage. The three small rough stones which stand nearby are certainly gravestones and may well be of the same age.