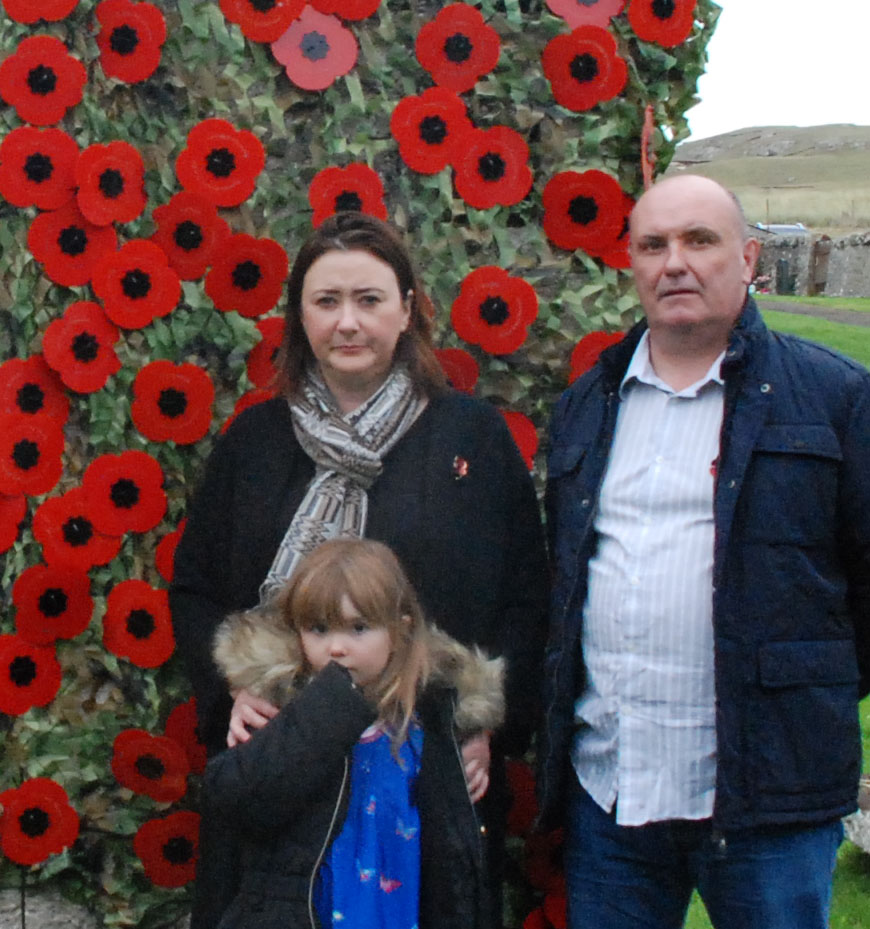 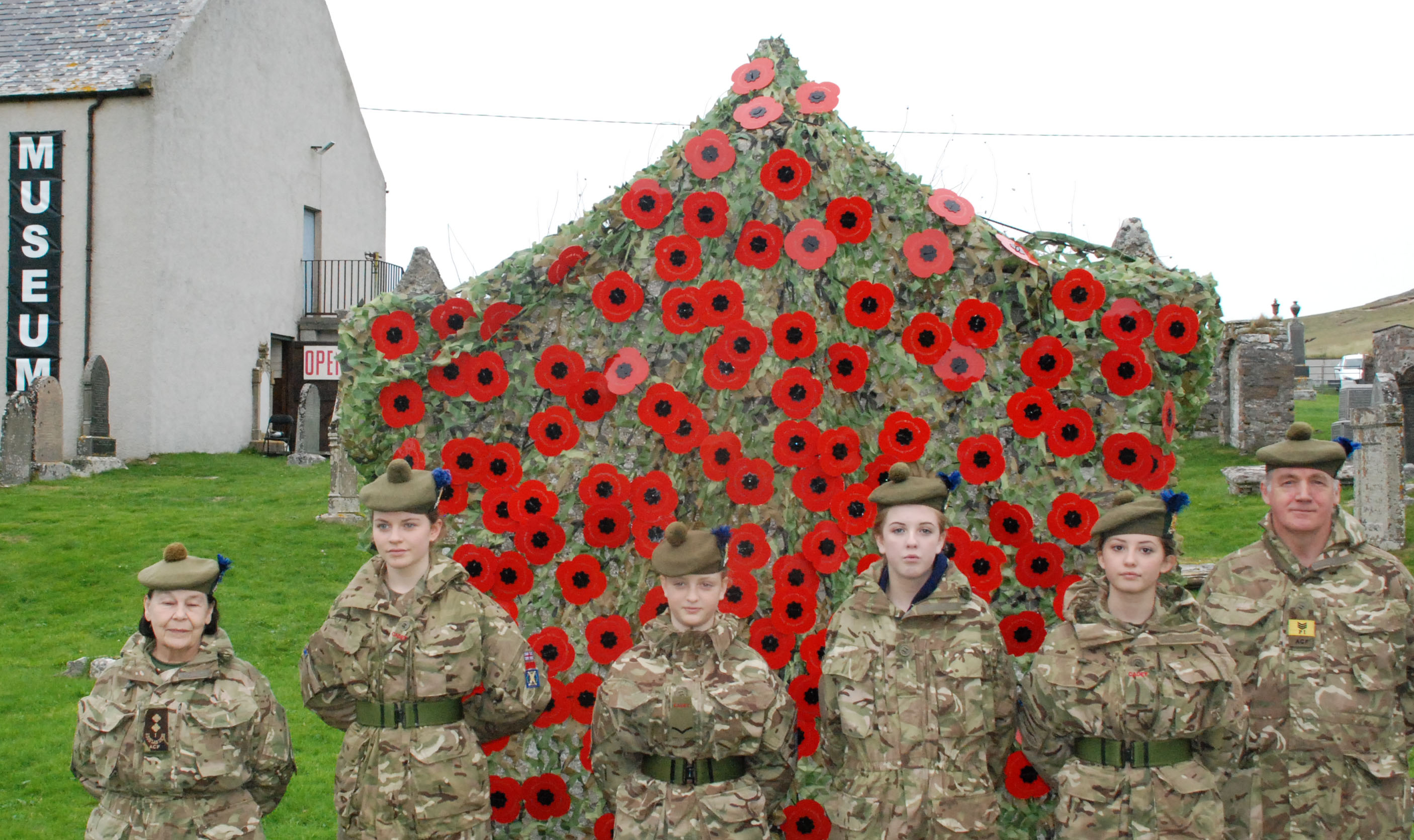 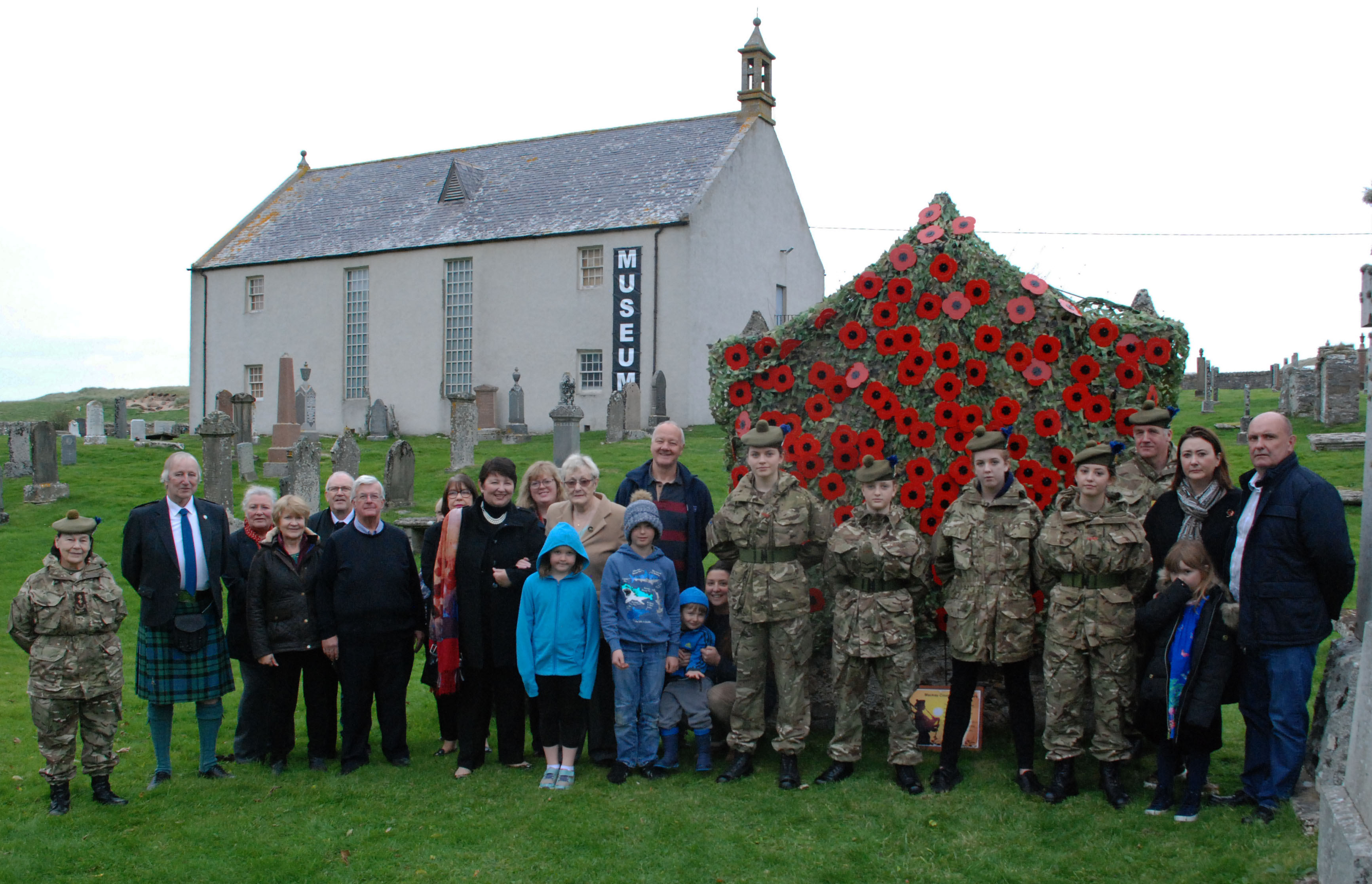 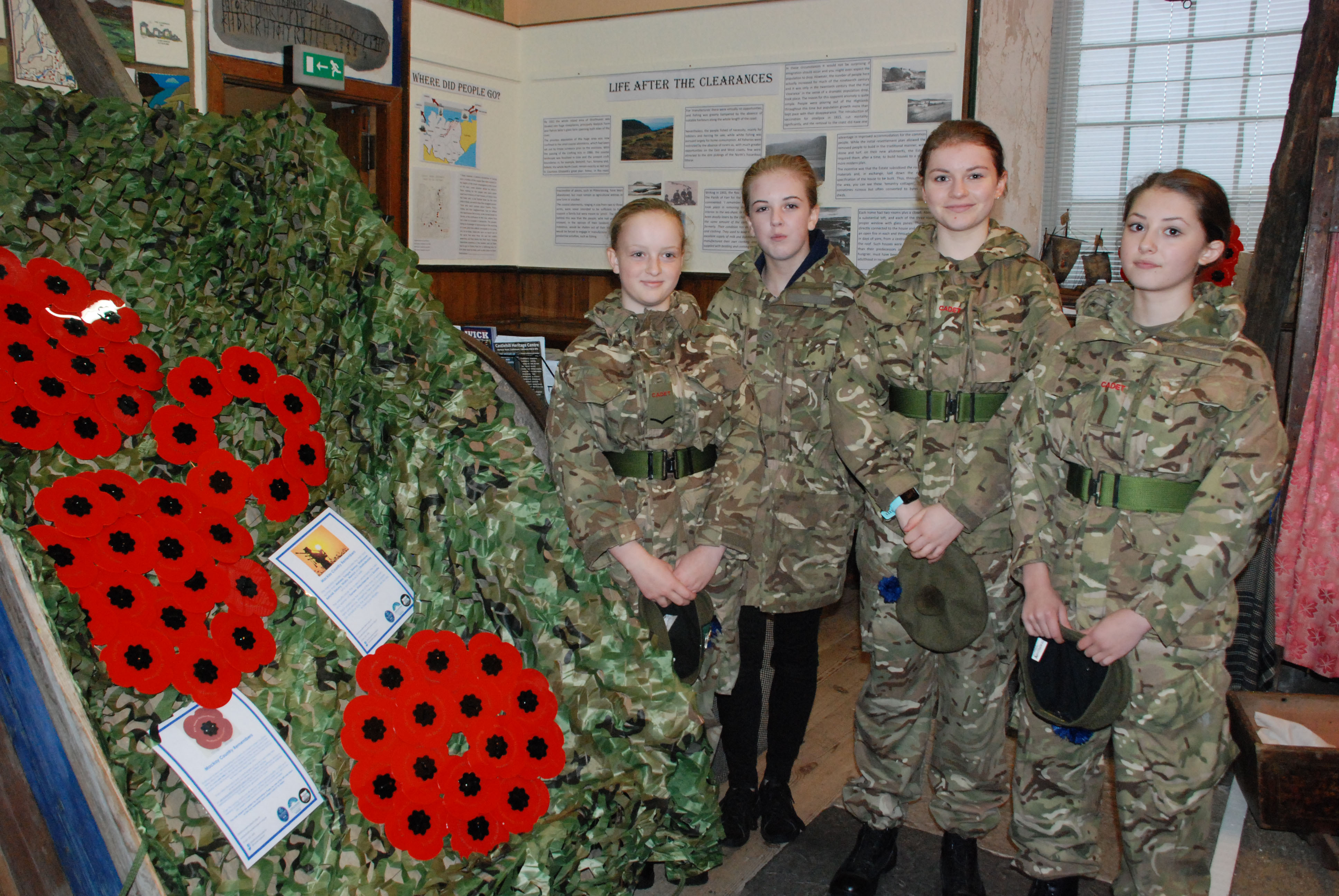 Strathnaver Museum continued its four year programme of remembrance events on Saturday with a gathering at the Museum to publicise the Poppy Wall it has been creating in memory of the 216 men, and one woman, from Mackay Country who gave their lives for their nation in the Great War.  The plastic poppies, designed and manufactured by Martin and Joan Reid of TECS Ltd, Tongue, are currently on display in the precincts of the Museum with ones for Halladale to Melness adorning a monument in the surrounding cemetery while those for Durness, Kinlochbervie and Scourie are on wreathes within the Museum itself.  Each poppy bears the name, rank and regiment of the deceased individual and will eventually be removed from its current location and incorporated in to wreathes to be laid at the twelve war memorials in North-west Sutherland during the centenary Armistice Day remembrance services on Sunday the 11th of November this year. Prior to that a further special event, where members of the public will be invited to help create the wreathes and share information, will be held by the Museum on the 3rd of November.

In the meantime the highlight of Saturday’s ceremony was attendance by members of Farr High School Army Cadet platoon together with their instructor, Pete Malone, who gave a speech on the implementation of the Armistice: ‘Lets’s step back in time to just before dawn on the 11th November 1918. It is cold and foggy and the Sergeant has given the command to move to the fire step. Dawn is the most likely time for an enemy attack and you’ve got be ready just in case. You stand on the step, rifle loaded, gazing across no man’s land for signs of advancing German troops. You’ve heard the rumours that the war will be over soon. You’ve been hearing those since it started in 1914. The sky slowly lightens and the “Stand Down” command is given. You’re tired because you’ve been awake all night. Snipers make the hours of darkness the only safe time to move about the trenches. So far, the war has lasted 4 years, 3 months and 16 days.  You don’t know that at twenty past five this morning an armistice was signed which will stop the fighting at 11 o’clock. The news is known in the capital cities of Europe before 6 o’clock but communications to the front are so poor that, even though of the Generals may know, the front-line troops don’t. Some never find out.  There are 11,000 casualties on the last morning of the war. George Ellison, the last British soldier to die, is shot at half past nine while on patrol outside Mons in Belgium. Augustin Trebuchon, a runner in the French army bearing the message of the ceasefire to the front, is killed by a single shot at a quarter to eleven. He is the last Frenchman to be killed. George Price, a Canadian aged 25, helping to clear the outskirts of Mons dies when a sniper makes another kill. He is the last Commonwealth soldier to die. It is two minutes before 11 o’clock. Sergeant Henry Gunther, an American ordered to attack a German position, is shot dead with a minute to go and becomes the last soldier to die during the Great War. At the 11th hour of the 11th day of the 11th month the guns fall silent along a battle front that stretches 440 miles from the English Channel to the Swiss border.’

Pete went on to outline the process by which the Armistice, on the 28th June 1919, became a supposedly permanent peace treaty and how the process of memorialisation and remembrance subsequently took root across the nation and continues to this day. There are, of course, many newer names on the war memorials as that badly negotiated treaty did not lead to lasting peace but was a potent factor in the political upheavals which led, twenty years later, to an even more destructive war.

Major General Patrick C Marriot of Golspie had also been expected to attend but was unable to do so in the event.  However, he sent the following message,  ‘Remembrance is always important and never more so than in Sutherland. The Highlands and Islands of Scotland paid a heavier price per head of population than anywhere else in the UK.  Tragedies told across all of Sutherland where the closeness of the community made every loss felt all the more deeply.’

The Mackay Country Remembers Poppies were designed and manufactured by M & J Reid of TECS Ltd, Tongue. This is a new venture in laser engraving and product design and we hope to showcase more of their designs in the future. For more information telephone 07900811620 or email tecsengraving@gmail.com