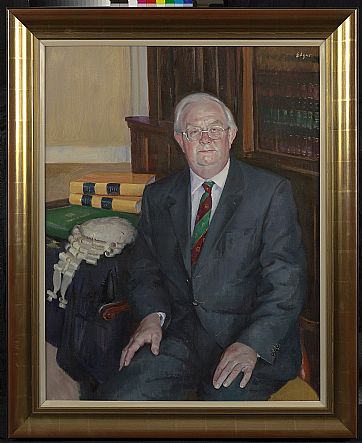 Sir William McKay formerly Clerk of the House of Commons, between 1998 and 2002. Portrait was done by Norman Edgar, which is in the House of Commons collection. My family, who are McKay McInlays, come variously from Achtoty, Blandy and Strathmoreskerray, Tongue.

My great-great-grandparents were JOHN MCKAY MCINLAY (d 1883) and ANN MCKAY (GOW) (d 1876). John’s father and grandfather – both of them also JOHN MCKAY MCINLAY – were fishermen in Strathmoreskerray, until in 1828 John’s father was evicted for arrears of rent and went to live as a cottar in Lamigo. Ann’s parents were JOHN MCKAY (GOW) mason and ground officer of Tongue (d 1820) and BARBARA MACLEOD. They had a holding in Blandy from about 1802, but before they went there two of their children were born in Coldbackie and Dalcharn. We cannot trace that part of the family further back than that generation.

When John McKay McInlay’s father left Lamigo, he was given a holding on Blandy. The holding he had was formed when the factor divided Widow John McKay (Gow)’s into three parts, so John McKay McInlay and Ann McKay (Gow) were neighbours. Widow John McKay (Gow) lost her holding in Blandy in 1836 after a big row with the factor, when the glebe was re-fashioned and her lot was needed for one of the families removed from it. She went to live with her son George, a mason like his father, in Dalcharn. The young couple got one of the last two newly-created crofts in Lotts, Achtoty, where they brought up their family. The rent was a shilling a year, and the lot was steep and stony, amounting to only an acre. John fished out of Skerray.

The second son of John McKay McInlay and Ann McKay (Gow) was ALEXANDER MCKAY, my great grandfather, who went to work as s sawmill labourer in Newhaven in 1862. His son, my grandfather, was WILLIAM MCKAY, as was my father.

My grandfather was Alexander’s second son. The first son, JOHN MCKAY, was sent as a very young child from Newhaven back to Achtoty to his grandparents. He lived there for most of his life but died at the Mall of Skerray.