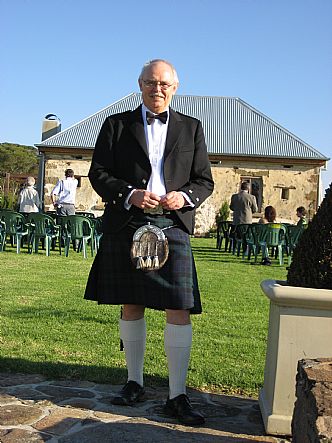 My name is John Denholm HARE and my paternal grandmother was a Mackay.

My father’s mother’s maiden name was Barbara Bain Mackay and she was born on 12 August 1874. The birth was registered at Halkirk, in the County of Caithness. Her father was John Mackay, his occupation stated as a quarry labourer, and her mother was Elizabeth Mackay whose maiden name was Bain. They married at Reay, County of Caithness. My great-grandfather was Donald Mackay and my great-grandmother was Ann Mackay. His occupation was also a labourer and I think they lived in Thurso. My grandmother was a domestic servant and must have moved from Caithness in the late 19th Century to Edinburgh where she married Adam Denholm Hare on 4 June 1897.

I went to Australia out of curiosity and a sense of adventure. I was educated at Melville College, Edinburgh (1955-1965) and studied Modern History and Politics at the University of Sheffield, England (1965-1968). I spent most of my career in various government relations roles and latterly held the position of Director, Governance, Regulation and Risk with the ACT Department of Education and Training, in Canberra, Australia.

I retired in January 2009 and am spending some time in the UK visiting family and friends and researching my family’s connection with the Mackays. I plan to visit Strathnaver later this year.