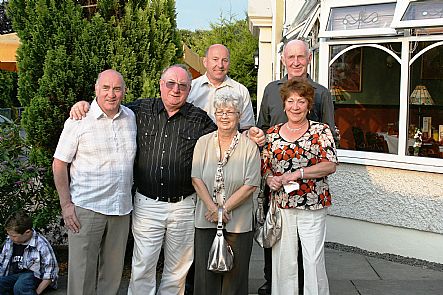 The family were based in Beauly, Inverness-shire. Father and mother both worked for Lord Lovat (Fraser Clan) on his estate where I was born in Ballindoun near Beauly. There were 6 in our family (see photograph).

My maternal Grandfather was a sniper with the Seaforth Highlanders (WWI) and a shoemaker by trade. He made shoes for the Frasers and lived in Beauly. My maternal grandmother was a Ferguson from North Uist and did not speak English until she was 12 years old, only Gaelic was spoken. My Grandparents lived in Beauly all their lives. I was brought up with them due to wartime (born May 31st 1939).

My Dad’s father died near Bettyhill of hypothermia following a severe snowstorm. His mother died of injuries when lighting a fire at Dalcharn, Bettyhill.

My father spent 4 years in the RAF in England and then worked for Kings Quarry. I have two brothers who are retired electricians, one brother a carpenter and two sisters. See photograph.

I played jazz with the Melotones Band from Dingwall for several years. I married in 1964 and emigrated to Canada in 1966 after taking power engineering training. I spent 30 years in the energy industry in Alberta and many years as a volunteer in Fort McMurray. Canada was co-founded by the Scots and of course Scots are everywhere. There are 4.3 million Canadians of Scottish descent. I was Director of the Alberta Robert Burns Society, Big Brothers, Food Bank and was awarded the Alberta Centennial Medal for Community wok in 2005.

My wife was a journalist in Inverness nd after settling in Canada took up work with te Alberta Education Department. She also studied world history at University of Alberta.

Once you travel to other parts of the world all Scots names gets mangled up both in spelling and in pronounciation. Some are almost unrecognisable.

There are Scots or people of Scots heritage all over the world as we have found. Some barely speak English. Some could hardly find Scotland on the map. Some wear kilts and have never been to Scotland but of course we Scots have never imposed rules on who can wear the kilt. Enjoying Scots and Scottish Heritage is common but I take exception to crude jokes at Scots expense, sometimes told by Scots themselves.

I am a member of the MacKay Society of Canada who also have connection with Bettyhill and Strathnaver generally. All my ancestors on my father’s side are buried in the cemetery and I have taken many pictures of their head stones. My father’s brothers Phillip and Jimmy were also born in Bettyhill.

The Defence Minister of Canada is Peter MacKay whose folks are traced back to Dalcharn.

In 2008 we made a trip from Canada to Scotland and visited the Museum and talked to the curator. I told him about the most famous MacKay in the sourthern USA who was James MacKay from near Helmsdale. He became a cartographer (mapmaker) and also spoke many languages. He was a furtrader, explorer and enabled the Lewis and Clark expeditions in the USA to proceed with his detailed maps of the Missouri. I talk to the author quite often as she is a MacKay by ancestry. There are several monuments to James MacKay. I recommend the book by Helen Ogden Widener – “James MacKay, a Man to Cherish”. I also had a reunion with the last living members of the melotones band in Dingwall.

It is estimated that there are over over 3000,000 direct descendans of the MacKay Clan across the globe. There are MacKays in Mexico, in Argentina and all across North America including Canada and of course McKies, McKees, Mckyes, McKays, mckays, Kies, etc etc.