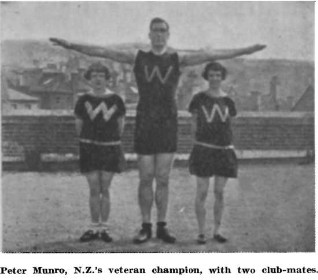 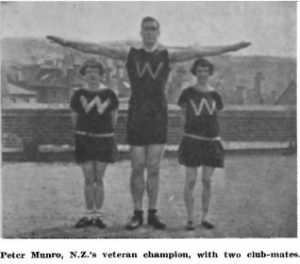 Peter Munro born in Skinnet, Melness 1892, the son of John and Ellen Munro was destined to become one of New Zealand’s greatest amateur athletes. By 1936 Peter held the title of champion shot putter in the Dominion, a title he held—with breaks when he did not defend it—since he scored his first win in the season of 1919–1920.

Peter’s athletic career began as a young lad in Melness when in 1910, just before his eighteenth birthday, Munro won the Junior Championship of Scotland. He placed first in four events—shot putt, hammer throw, tossing the caber, and catch-as-catch-can wrestling.

After winning the junior championship, young Peter was repeatedly challenged by the ‘strong men’ but, without exception, held his own. Among the men he defeated before celebrating his eighteenth birthday was Starkey, later to become one of Scotland’s most successful athletes.

Before his 18th birthday Peter joined the Clydebank Police Force where he found opportunities to continue his competition in field events.

Leaving Scotland in 1912, Peter arrived at Perth, Australia and joined the West Australian Police Force. Once more he figured successfully in field sport and, in his first competition, succeeded in defeating the hitherto unbeaten shot-putting champion of the State. He stayed a year there and won the shot and hammer titles and figured in the Police tug-of-war team which won the West Australian title.

From Perth, Peter travelled to New Zealand, arriving in August, 1914. Within a few months he had made a name for himself by winning the principal events at the New Year gathering at Timaru. He won the shot putt, the lightweight shot putt and the lightweight and heavyweight hammer throwing events.

In April, 1915, he joined the New Zealand Expeditionary Force and was drafted to Trentham. Here he caught the eye of Jack M’Holm, another prolific title-winner. There were few men in New Zealand more capable of judging the possibilities of a field event athlete than Jack M’Holm who said: “I have come across a future champion. His name is Munro, and if you don’t hear more of him I’ll be surprised.”

During the First World War Peter left New Zealand with the Fifth Reinforcements and was initially stationed in Egypt. Military duties were interspersed with company sports, and the name of Munro soon became well-known among the troops. A bad attack of diphtheria sent him to Lemnos instead of Gallipoli arriving in Britain in 1916. He went to France with the Red Cross contingent where at Passchendaele he received severe head wounds. After recuperating in England he spent time at the Officers’ Training College at Cambridge where he had plenty of opportunities to participate in field sport; winning the shot putt, the high jump and throwing the cricket ball. He also played for the New Zealand Rugby team at the Training College, but this was because they were short of a full team and not because he was a star performer!

In 1918, Peter was commissioned joining the New Zealand Division, and in July of the same year was selected to represent New Zealand at the American-British Empire Services’ Sports at Stamford Bridge. At this meeting, he established his best performance and won the shot putt with 49ft 7ins. Among those he defeated was Starkey, his old rival of 1910.

In 1919, Peter returned to New Zealand joining the Police Force at Wellington and became a member of the Wellington Amateur Athletic Club, at the time becoming the most consistent points’ scorer in championship contests.

Peter competed at the Australian and New Zealand Track and Field Championships in Australia in 1920. Winning the shot putt and placing second in the hammer throw behind his old mentor M’Holm, he justified his inclusion. The New Zealand team scored four wins and five seconds and was said to be one of the best ever to wear the Silver Fern in Australia. In all, Peter Munro had won five Australasian championships when the meetings were abandoned in 1927.

When the discus throwing event was included on the New Zealand championship programme, in the 1919–1920 season, Munro proved to be the winner.

Peter married Christina (Chrissy) Olsen in 1920 and they had three sons John (Jacky) Arthur Munro, Peter Munro Jr. and Douglas Gordon Munro.  Peter served as the Assistant Police Commissionaire Auckland District and during his tenure he was the patron of the Police Recruitment Wing where the Munro Canteen and Munro Sports Shop are appropriate memorials for a man who achieved so much during his sporting career; winning an impressive 68 championships. Peter Munro was awarded the Order of the British Empire (OBE) for his services to sport in the New Years Honours (New Zealand) List in 1956. Peter died in Auckland in 1971.

Find out more about the Mackay Country Stories project and how you can become involved at the above link.